My Last War: A Vietnam Veteran’s Tour in Iraq 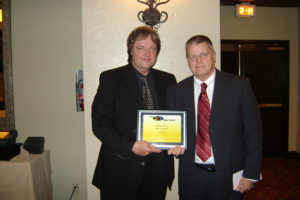 2009 DIY Book Festival grand prize: The awards ceremony was held in February, 2010 at the historic Roosevelt Hotel in Hollywood, California. The photo shows author Grist receiving the award, which included a cash prize of $1,500, from Bruce Haring, managing director of the DIY Convention.

Gold Medal/First Place (2010) in the Memoir Category of the Military Writers Society of America Awards.

Richard Boes Award: This award is sponsored by Modern History Press and the awards criteria is “Best debut book by a veteran (fiction or memoir).” The award is named for Richard Boes who enlisted in the U.S. Army and served in Vietnam in 1969 – 1970 with the First Air Cav. He was the author of two books: The Last Dead Soldier Left Alive (2007), a firsthand inquiry into why thousands of Vietnam veterans have committed suicide, and Last Train Out (2008). Right up to his death, he was writing a third, In the Valley of Dry Bones. He passed away on February 21, 2009 at the VA Hospital in Albany, N.Y.